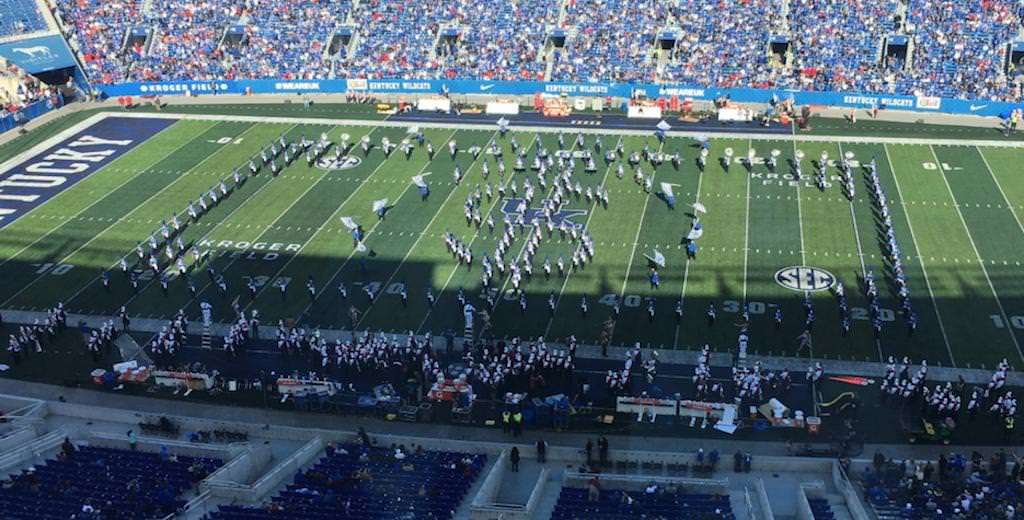 In 2015 we had the Kansas State “USS Enterprise” formation, earlier this year we had the Clemson Band’s “31-0” formation and now we have the Kentucky Wildcat Marching Band “Dollar Sign” formation.

What do they all have in common?

They were all formations seen by the sports world, interpreted as offensive or trolling and completely blown out of proportion.

The latest formation happened Saturday at halftime of the Louisville vs Kentucky game.

Earlier this year the Louisville basketball program was investigated and named in the FBI’s report about a “pay to play” recruiting scandal in college basketball. It was revealed that Louisville had agreed to pay a recruit a large sum of money to play there. This lead to the ouster of famed coach Rick Pitino and the Louisville Athletic Director, Tom Jurich.

The show was originally performed on November 4th at Kentucky’s most previous home game. During the show the band plays Bruno’s 24K Magic and makes a dollar bill formation with a large dollar sign in the middle of it. The song specifically mentions and refers to money multiple times which makes this formation appropriate.

Well, during halftime media members with a high enough perspective to see the formation immediately took photos and tweeted out that the Kentucky Wildcat Band was “trolling” Louisville’s basketball scandal.

Here are a few from rather reputable outlets fueling the controversy:

Kentucky's band had some interesting formations during halftime of today's game against rival Louisville. pic.twitter.com/VF4OjU1MOM

(the music in that video is not from the band, its random music ESPN used over the video)

The Kentucky band has jokes vs. Louisville 👀 pic.twitter.com/hm2WEa56rm

After ESPN shared their tweet fans were split on the formation. Many thought it was hilarious while others were not happy about it. The real issue is that neither are relevant because the band was in no way shape or form trolling Louisville. This was completely made up by those media members to cause controversy and fit their narrative of rivalry week.

Kentucky’s Director of Bands, Dr. John Cody Birdwell told the Courier Journal that “the drill and dollar sign was solely related to the theme of the show and related music.”

One thing many in the sports world don’t understand is that marching bands are not out to troll other schools nor are there “band rivalries”. Sure band members want to perform their best when another band is at the game and yes band members may not “like” other schools due to sports rivalries, but there is no competition in college marching band. No one wins or loses at halftime. It appears that sports outlets have bunched all college bands into the same bucket as Stanford, Rice and other scatter bands. These bands routinely make funny jabs at other schools at halftime. They also have significantly less oversight to control what they do on the field, but even then they blatantly mock or troll other schools and you don’t have to guess if they are or aren’t.

99.9% of college bands would never risk causing controversy due to the already declining budgets and increase in ad time we are seeing across the country. And those bands that are not scatter bands that do “troll” other schools do so tastefully and blatantly. Ohio State’s Marching Band “trolls” Michigan in almost every halftime show. They don’t do it in subliminal formations, they make it very clear.

Again 99.9% of college bands aren’t out to make subliminal trolling messages to their fans, they are there to perform for 8-10 minutes, entertain fans and remain controversy free.

The rush to create controversy in the sports media world is out of control and this was a blatant attempt to drive eye balls to websites and TV which ultimately drives, yep you guessed it, $$$.